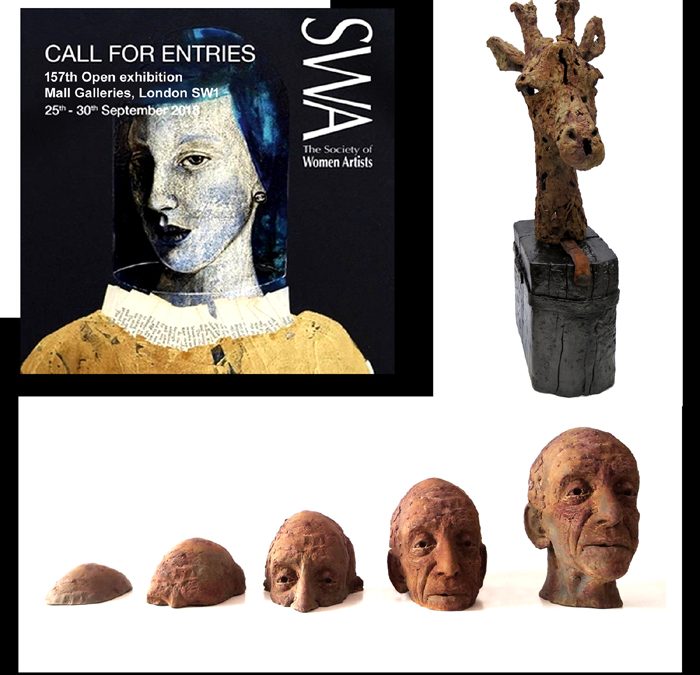 I am delighted to have two of my sculptures selected:

Founded as the Society of Female Artists, this unique group has held an annual exhibition in London of the work of women artists ever since 1857. In the process, it has introduced many famous names to the world of fine art appreciation, and their works to well-known art galleries and public places.
In the mid-nineteenth century, women were not considered to be serious contributors to the field of art and had great difficulty in obtaining a public showing. At the first exhibition, 149 women showed 358 works, some hiding their true identities for fear of social recrimination.

The art world was dominated by the Royal Academy which, at its foundation in 1768, had two women among the founders but had no other women academicians for over 150 years when, in 1922, Annie Swynnerton S.W.A (a member since 1889) was elected as an Associate.

The Society attracted some of the most noted artists of the time; when Lady Elizabeth Butler’s The Roll Call was displayed at the Royal Academy in 1874, even Ruskin, with his peculiar views of femininity, revised his opinion that no woman could paint. The S.F.A was involved in education for women artists, effectively excluded by the mores of the time from professional training. Even for those who did gain a place at art school, the model in the women’s class would be decorously draped on grounds of propriety.

With increasing access to professional training came higher standards or the Society’s exhibitions and a name change (in 1869) to the Society of Lady Artists. Appropriately, in the last year of the century, the mid-Victorian persona was discarded and the twentieth century was embraced by the Society with the new name: The Society of Women Artists. The patron is HRH Princess Michael of Kent but the Society has enjoyed Royal patronage since 1865.

We use cookies on our website to give you the most relevant experience by remembering your preferences and repeat visits. By clicking “Accept All”, you consent to the use of ALL the cookies. However, you may visit "Cookie Settings" to provide a controlled consent.
Cookie SettingsAccept All
Manage consent

This website uses cookies to improve your experience while you navigate through the website. Out of these, the cookies that are categorized as necessary are stored on your browser as they are essential for the working of basic functionalities of the website. We also use third-party cookies that help us analyze and understand how you use this website. These cookies will be stored in your browser only with your consent. You also have the option to opt-out of these cookies. But opting out of some of these cookies may affect your browsing experience.
Necessary Always Enabled
Necessary cookies are absolutely essential for the website to function properly. These cookies ensure basic functionalities and security features of the website, anonymously.
SAVE & ACCEPT